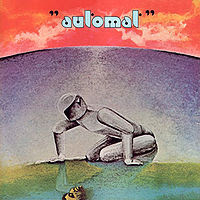 
Automat was a project of a disc, from the Italians Musumarra, Gizzi and Maggi. The first two were members of the pop band La Bottega dell'Arte that was successful in Italy between 1976 and 1984. The "Automat" LP was released in 1978 as a kind of demo Synthesizer MCS70 (Memory Controller Synthesizer 70) built by Maggi. The funny highlight of the LP is the band Droid, who say they were the opening theme of a TV news at TV Globo (Brazil) in the early 80's. In fact parts of this theme were used twice in television news, in one of them no Globo Esporte noon. This all in it for 81/82. But it was common to the Globo television, since I remember that was used in the novel called "Brilhante", type in 80/81. There are many more electronic themes that the Globo TV used in the field of the Fantástico.

This blog does not store any files on its servers. Pictures and clips are posted for promotional purposes only and are not to be sold or traded in any way, shape or form. We only index and link to content provided by other sites. These links are result of our RESEARCH. This blog is for preview purposes only and all files downloaded from here should be deleted within 24 hours. If you like these texts or some other stuff posted here, you are strongly advised to buy it. Books, film and magazines companies need support for quality products. You may NOT use these texts, pictures, audio or video releases to make money or use it for commercial purposes.